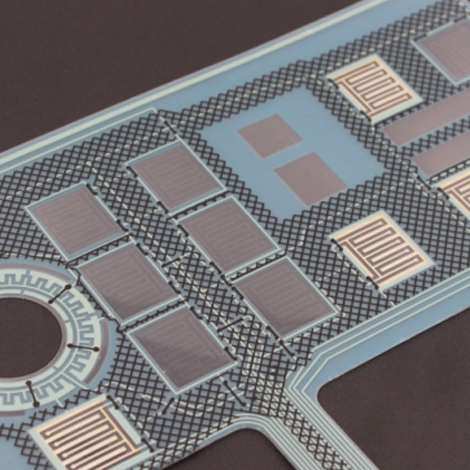 Looking to transition from mechanical switches to “touch” technology, a leading US-based commercial appliance manufacturer approached luphi to develop a new generation capacitive touch user interface for their refrigerator freezers. While the customer wanted to give luphi the utmost flexibility in terms of designing the capacitive circuit, they had already developed a universal motherboard and were set on icon sizes. As a result, the pinout and switch sizes were already determined and the engineers at luphi had to work through these limitations to strategize the circuit layout. Additionally, during development, the customer decided to revise the circuit configuration to incorporate backlit switches. This prompted luphi to introduce Pedot ink, a special clear polymer ink, which presented additional printing and processing challenges to the project.

The customer engaged luphi to design a capacitive touch circuit that would ultimately be sandwiched between a dead-front glass overlay and a pre-designed motherboard. After learning about the pre-determined switch sizes, switch locations, and pin locations, luphi chose to utilize mutual capacitance sensing since it could be matrixed to use the limited number of pins available. The engineering team went through several rounds of designing and fine-tuning of the circuit layout to achieve the targeted signal-to-noise ratio, shielding, and response time.

Based on the initial design and target resistance requirements, luphi applied its rapid prototyping capabilities to develop a mutual capacitance circuit with standard inks (silver, carbon, and dielectric). After receiving the prototype, the customer updated the circuit design to incorporate backlit switches by mounting discrete LEDs on the existing motherboard. But since the primary design of the circuit employed only standard conductive inks, the opacity of the inks would block the light from the LEDs, resulting in inconsistent lighting and shadowing. Luphi resolved this issue by introducing a Pedot ink into the circuit in addition to the standard inks. Although, the inclusion of Pedot ink was not straightforward and presented several hurdles and complexities.

Firstly, as a clear polymer ink, Pedot ink was extremely difficult to print and process on the production floor. Its inherent transparent nature made it challenging and laborious to examine line breaks during printing. Secondly, during the initial prototyping phase, the circuit was designed with three distinct layers of ink printed in three separate print passes. The introduction of the Pedot ink added another ink layer and print pass to the process, which translated to a longer curing time. To overcome this hiccup, luphi brought into play its two-colored web printing line. Equipped with a tower dryer and higher drying capacity, the web line allowed parts to run at a faster rate and for two print passes in a single set up, thereby accelerating the production time.

While designing the capacitive switches, the goal was to mitigate external noises to enhance signal strength and optimize sensitivity. However, the resistance of the Pedot ink was much higher than the standard conductive inks, which led to decreased signal strength. Then, the engineering team’s efforts to amplify signal strength resulted in substantial cross-talk. Finally, luphi modified the shielding into an intricate pattern of crosshatches on the circuit to shield areas of concern from cross-talk without excessive switch desensitization. These patterns were continuously adjusted and tuned for better performance.

After multiple rounds of prototyping, the capacitive circuit design was finalized and given the green light for full-volume production. While the customer’s design teams were based in North and South America, their final integrator was based in China. Therefore, to simplify the logistics for the project, luphi decided to run the final production of the part in its Singapore Division. Equipped with automated testing equipment, luphi's Singapore Division cruised through production. The Production Part Approval Process (PPAP) for design verification and part validation ensured consistency across all manufactured products. To keep pace with the high volumes of this project, luphi's Seattle, WA Division also supplemented a small portion of the run as well.

Once the capacitive sensor was developed, the customer leveraged luphi's know-how to implement the same technology in other appliance models. Luphi truly mobilized its global manufacturing resources to work in a consortium with the customer’s America-based design team and China-based integrator. Luphi's technical expertise, experience, and rapid prototyping capabilities enabled the commercial appliance manufacturer to effortlessly enter the new world of capacitive touch.

1. How to order a membrane switch?

You could advise us on the size, color, material, surface, rear adhesive, etc. requirements. And you'd better send us the drawing together with panton color or RAL color.

2. What is the delivery time?

Delivery time for samples is about 7-10days. The quantities order would take 2 weeks. For complicated products should take 2-3 weeks.

3. Is the prototype necessary?

Yes. Most of the items are customized orders, so the prototype will be sent to the customer for approval.