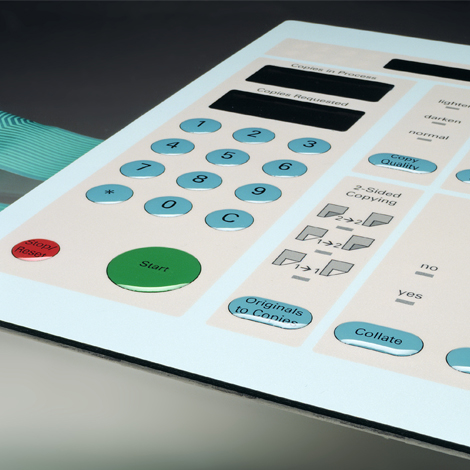 MESA specializing in medical monitoring instruments, had developed a new digital dialysate meter called the pHoenix XL. The syringe-style meter was designed to precisely measure the temperature, pH value, and conductivity of liquids in various clinical applications. During production of this new handheld device with another vendor, MESA Labs ran into sealing issues that led to the ingress of moisture in their membrane switch construction. So, they approached luphi to resolve the issue and enhance the performance of the device.

In order to get to the source of the sealing problem, luphi closely examined the device and discovered two key design flaws. First of all, the original design utilized a fold-over circuit construction that allowed moisture entry. Secondly, portions of the perimeter sealing gasket were too narrow, resulting in an inadequate bond between the switch assembly and the mounting surface on the meter housing. The small gap created between the fold-over circuit layer, together with the inadequate adhesion of the gasket, created a path for moisture to seep into the device. In addition to the sealing issue, the overlay for the original device had a thin graphic border which led to increased scrap during fabrication. Also, the use of non-plated stainless steel domes in combination with the silver conductive inks of the circuit had the potential of compromising circuit life for the device.

To combat the core issue of sealing, luphi replaced the fold-over circuit design with a single layer circuit. Then, the membrane switch array was moved towards the center of the overlay. Shifting the location of the switches allowed for the sealing gasket width to be increased, allowing a stronger adhesive bond between the switch assembly and the housing. Luphi created a rapid concept prototype of the single layer membrane circuit and digitally printed the graphic overlay in textured polycarbonate so Mesa Labs could quickly review the design changes. Non-plated steel domes were replaced with nickel-plated domes in this improved design to enhance the compabatibility between the the snap domes and the printed silver circuit.

After studying the prototype and fine-tuning the design even further, luphi proposed increasing the graphic border width on the overlay to improve fabrication yields. The customer was at first reluctant to modify their design but became more receptive after reviewing examples of potential changes. Luphi's rapid prototyping department created different art layouts with varying border widths to demonstrate the impact of border width on manufacturability. After receiving the green light from MESA Labs for a thicker border, a second prototype was developed to integrate all the design revisions. The second prototype also utilized production printing processes to present parts with the look of the final production design.

A hard-coated gloss-finished polyester formed the substrate of the graphic overlay. A UV hard-coated texturing was applied on the entire surface, except for the display window area, to obtain a dual finish. Since polyester cannot be embossed at room temperature (as the first polycarbonate overlays had been), the four buttons on the overlay were heat embossed as they would be in production.

Luphi utilized a combination of two printing techniques for the overlay offset and screen printing. Offset printing is well suited for intricate details, such as the fine text and key borders on this part and worked perfectly for the black and gray colored graphics. Screen printing was utilized for the remaining two colors - teal and white. Following printing, a zoned adhesive layer was adhered to the bottom of the overlay.

As for the circuit, the original design utilized a circuit tail configured to mate with a zero insertion force (ZIF) connector. MESA Labs wanted the redesigned switch assemblies to be backward compatible with their existing circuit board design. The circuit traces on the circuit tail had to be printed on one side of the circuit, with the rest of the traces on the other side, which required through-hole printing. Roll-to-roll printing, ideal for through-hole printing applications, was therefore employed to print the silver conductive ink, carbon ink, and the dielectric ink on the circuit. In addition, a tail stiffener was added to the carbon-inked tail of the circuit, increasing the thickness in order to meet grip requirements of the ZIF connector. After final assembly, the finished switches were burnished at a controlled pressure and duration to ensure maximum adhesion between the different layers.

Resolving last-minute design challenges, luphi worked hand-in-hand with MESA Labs to bring their new device to life. Thanks to luphi's team of technical experts, the resulting product not only eliminated the sealing issues, but also drastically improved the durability, performance, and visual features of the pHoenix meter. This project clearly illustrates how luphi can bring together its technical know-how and rapid prototyping services to address even the toughest of design and manufacturing challenges.

1. How to order membrane switch?
You could advise us the size,color,material,surface,rear adhesive, etc. requirements. And you'd better send us the drawing together with panton color or RAL color.

2. What is the delievery time?
Delivery time for samples is about 7-10days.The quantities order would take 2 weeks. For complicated products should take 2-3 weeks.

3. Is the prototype necessary?
Yes.Most of the items are customzied orders,so the prototype will be sent to customer for approval.